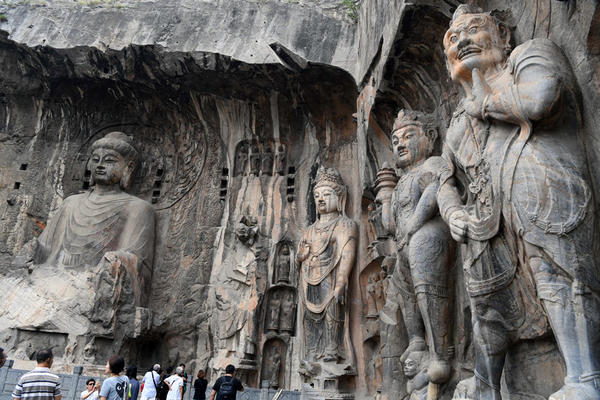 These grottoes reflect the heyday of Tang Dynasty culture (618-907).

Located 13 km south of Luoyang, Henan province, the Longmen Grottoes are concentrated on the east and west cliffs of the Yishui River, and stretch for one km. Work started on the grottoes around the year 493, during the Northern Wei Dynasty, and continued for the next 400 years. In total there are 2,345 caves and niches, housing more than 100,000 statues of Buddha, Bodhisattvas and Arhats, together with 2,840 inscribed stone tablets and over 60 stone stupas. Among them, the most representative caves are: Guyang Cave, Binyang Cave, The Lotus (Lianhua) Cave of Northern Wei, Qianxi Temple, Cave of Ten Thousand Buddhas (Wanfuo), Fengxian Temple and Kanjing Temple. The rich collection of statues and figures, most of which can be dated, facilitate the study of the history of Chinese sculpture with precise data.

Large numbers of memorial texts and inscribed stone tablets at the Longmen Grottoes, like the Twenty Gems of Longmen Calligraphy and Zhu Suiliang’s stone tablets, are considered rare treasures of Chinese calligraphy. The Zhu Suiliang Inscription, made in 641 in honor of the mother of the fourth son of Emperor Taizong, is one of them.

The Longmen Grottoes was added to the list on November 30, 2000.

The grottoes and niches of Longmen contain the largest and most impressive collection of the plastic arts of China in the late period of the Northern Wei Dynasty to the Tang Dynasty.

The stone sculptures in the Longmen Grottoes are unique in their blending of religious grandeur and secular touches. Based on the essential concepts and doctrines of Buddhism imported from India, the rock sculptures in the Longmeng Grottoes already begin to assume distinctive Chinese characteristics. The style of the sculpture, the design of the clothing and the facial expressions of the statues, as well as the carving methods all exhibit the pinnacle of development of Chinese grotto art. For example, the 11 Buddha statues in the Binyang Cave, typical Northern Wei carvings, represent a style in transition from the simple and compact depictions in the Yungang Grottoes of Datong, Shanxi province, to the vigorous and realistic Tang Dynasty sculptures.

The Longmen Grottoes reveal the great creativity of Chinese artisans at that time. In the case of statues, differences of personalities were emphasized, with creative means of expression. Among the most famous figures in Buddhism, the serene Sakyamuni, the grave Kasyapa, the brisk Ananda and the muscular Guardian Warriors are all depicted with captivating details and impressive vividness.

Advanced techniques were also applied to achieve expressiveness. For example, in the modeling of large statues, artisans with a keen sense of perspective deliberately amplified the heads of the figures, so as to avoid virtual distortion; in the particular shaping of facial features, the Indian method of raising the nose bridge was adopted, and the Greek method of protruding eye pupils was not only borrowed but also enriched by the use of glass material. An exemplary piece is the statue of Vairocana (the Buddha of Great Enlightenment), which is 17.14 meters in height and highly acclaimed as the quintessence of Buddhist sculpture in China.

The Longmen calligraphic works constitutes an important chapter in the evolution of Chinese calligraphy. Mainly inscribed as memorial articles upon the completion of statues on the walls of caves and niches, they have been passed down for generations as precious remainders of calligraphic styles of that time. Twenty of these inscriptions are the most famous, categorized as the Wei epigraphic genre (weibeiti), a comparatively mature transitional stage of Chinese calligraphy.

Chinese calligraphy is a graphic art of high abstraction. It has developed for over 3,000 years and ranges in style from the meticulously and laboriously inscribed zhuan (seal) characters to the Li (official), Kai (regular) and Xing (semi-cursive) characters, and to the flamboyant and unconstrained Cao (cursive, or grass) characters. Like painting, it is often judged and described by such terms as balance, texture, vitality, energy, bones, wind, and strength. The Longmen calligraphy, mostly in the Wei epigraphic genre, featuring vigorous strokes, medium-slow progression, compact texture, latent energy and immense possibilities for change, has been imitated by many generations of calligraphy lovers.